Azulejos of Lisbon: testimonies of the past

Tiles are everywere in Lisbon. You can’t miss them!

Lots of them are just playing their own role of covering private houses’ façades. What for? For the sake of art and beauty, but not only. As a matter of fact, these tiles are very useful to balance the effects of Lisbon’s weather: they avoid walls to get too humid during winter or too hot during summer time.

They also tell Portugal’s history. Mostly close to churches, if not ON them directly, you’ll find great images made of tiles describing some of Portugal history’s most important chapters: the invasion of Portugal by the Arabic empire, the regain of the lost lands by the Conqueror (Afonso I of Portugal), the Great Lisbon’s Earthquake, etc.

Museu do Azulejo: get the most of Lisbon tiles’ history

The word “azulejo” comes from the Hispano-arabic verb “zallaja”, “az-zaleij”, that means “to turn smooth” or “to polish”.

Portuguese tiles come from the Arabic empire that expended into the Iberian peninsula for more than 700 hundred years, between 711 and 1492. The new inhabitants imported to the conquered lands their sense of luxury. They were using the polished tiles to provide brightness, colours and innovative geometrical forms to their architecture. Tiles were the ultimate chic of the time.

How did the Portuguese integrate tiles to their own Christian culture? How did this art of tiles evolve through history? Discover all answers at the Museu do Azulejo, open everyday but Monday from 10AM to 6PM.

Lisbon has seen a renewal of the art of tile during the XX century. The artists would then totally change the focus: from religion and historical events to Portuguese contemporary culture, symbols and new artistic trends.

Thereby in the metro stations of Lisbon, but also in the city’s most recent neighborhoods such as the Infante Santo avenue (at Lapa and Estrela neighborhoods’ border) and Saldanha, you find azulejos that tell another story.

Artists also started to integrate references to contemporary art movements: colours and patterns changed, representing the innovation of the time.

Azulejos: where to buy tiles in Lisbon in 2020

The raise of international tourism in Lisbon served azulejos’ worldwide recognition. Today, everybody wants to own its own azulejo. Most of people bring home a digital souvenir of Lisbon tiles: a picture on Instagram. But others still want a tangible souvenir! Here are some of the places where to buy tiles in Lisbon.

The Feira da Ladra, Lisbon’s flea market, is without a doubt an easy and cheap place where to buy tiles. Go check all details of one of Lisbon’s best markets!

New tiles stores recently opened in the city to satisfy all kind of tastes:
. Surrealejos: for people fond of surrealism
. Cortiço & Netos: a huge azulejo “library”
. Solar: for classic lovers, you can still find a beautiful antique tile for 10€
. Viúva Lamego: a 1849 atelier in Intendente
. Tardoz: where you’ll find fantastic tiles but also lots of other beautiful ceramic pieces!

In September of 2019, new types of tiles emerged: tiles that tell stories with words. The stories are about Lisbon’s last social “trend”: people being obliged to leave their house because of Real Estate pressure.

Without proper local laws limiting tourist rental licences, everyone started to desire a piece of the cake: individuals and Real Estate agencies bought – and are still buying – entire buildings to transform them in very lucrative Airbnb and alike. But they want to buy the buildings without their inhabitants.

Therefore, for years now, hundreds of low-class families have been under the frightening pressure of big Real Estate groups and many of them were forced to leave their house.

“Perdi a casa” (“I’ve lost my house”) is the urban initiative integrated in the HabitACÇÃO festival that put on Lisbon’s walls its most recent and saddest stories. Watch this great documentary to discover more about the social movement advocating the right to live in the city of Lisbon! 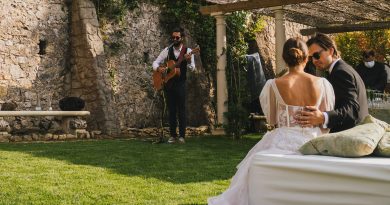 Street musician plays in a Vogue wedding in Portugal 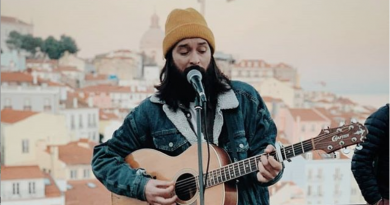 Busking in Lisbon – The ultimate guide for artists 2020 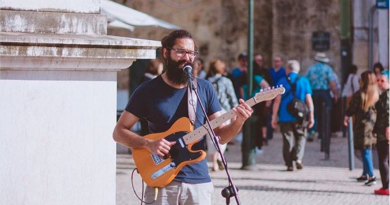 Street perform in Lisbon is allowed in 2020?